The story of Stuckey’s began in 1937, when Stephanie Stuckey’s grandparents opened a roadside pecan stand. Big things are made from such small beginnings. By the 1960s, Stuckey’s Corporation was 368 stores strong, with thousands of highway billboards pointing the way. The stores sold souvenirs, fuel, and candies, and they had become a significant part of the American road trip. The idea of her grandparents that had started so small would have a very long life, stretching into the next generation and beyond.

Yet by the time Stephanie was born, Stuckey’s Corporation had passed its heyday – and passed into other hands. She may have grown up a Stuckey, but she never thought of herself as an heir to the roadside empire her grandfather had built. She certainly wasn’t raised as one.

Stephanie grew up in Washington, D.C., where her father served as a member of Congress. In the nation’s capital, surrounded by diplomats and legislators, this third-generation Stuckey felt like a little fish in a big pond. Later, she would express gratitude for this lack of a feeling of entitlement connected with her family’s name. Indeed, as a kid, she had experienced her grandfather’s legacy the way any customer would, on road trips with her family.

Even when her father jumped on the opportunity to bring the ailing business back into the family, Stephanie pursued a career in law and politics. Characterizing the years Stephanie Stuckey spent practicing environmental law and heading sustainability initiatives as some sort of prelude to her destiny would be a little too pat. Stephanie loved her career, and she wasn’t looking for a change.

But the Stuckey’s her father acquired was not the Stuckey’s it had been. The business was losing money, and it soon became clear that the Stuckey family had a choice to make: either go all in to save the company, or let it wither. The latter option was one that Stephanie could not abide. She didn’t want to see her grandfather’s legacy end in oblivion.

As a trial lawyer representing the environment, Stephanie had learned the value of a good story well told. Good stories get a point across – and sometimes sway juries. The life and legacy of Stuckey’s had all the elements of a good story, complete with conflict and danger. Like a character in a thriller, Stuckey’s was in trouble; its very life was at risk. Now Stephanie had a chance to change the story. 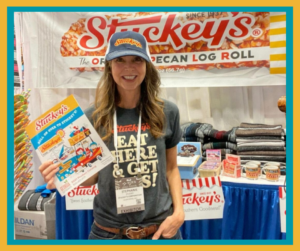 In 2019, she bought the company, becoming CEO of Stuckey’s Corporation. The road would not be easy or short, but with Stephanie at the helm, Stuckey’s Corporation has a new lease on life. As CEO, she has set her sights on a goal even bigger than reviving Stuckey’s. Even at its peak, her grandparents’ roadside empire had always been a part of something bigger. That something is the road trip, a way of discovering and rediscovering America. This vision, combined with a passion for storytelling, is connecting and resonating with customers all over the country. More than rebuilding an empire, Stephanie is building a community, something that would make the visionary founders of Stuckey’s proud.