Mount Everest may get most of the press, but the United States has its own rugged challenge to present to the physically powerful and mentally tough: the Mississippi River. Like ascending to the summit of Everest, paddling the length of the Mississippi River is a courageous feat. Doing it in record time is an extraordinary one. 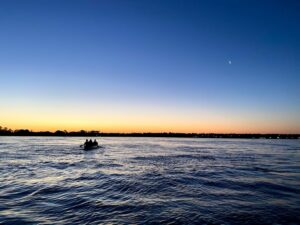 That is the goal Team MMZero gave themselves: set a new world record for a team’s fastest time to paddle from the headwaters of the Mississippi River at Lake Itasca in Minnesota to the river’s mouth, Mile Marker Zero in the Gulf of Mexico. That is about 2,350 miles.

KJ Millhone, the team’s oldest member at 62, was no stranger to daring canoe expeditions. Nor was he a stranger to world records. In 1980, Millhone and his friend Steve Eckelkamp set the world record for paddling the length of the Mississippi River. The two also made a try for the Amazon River record, but a flash flood cut their effort short. (The natural world’s total indifference to human ambition will be a recurring theme in this story.) According to Millhone, when Eckelkamp passed away in 2017, it felt like the end of an era. Without his friend, the days of canoeing adventures and world records seemed a thing of the past. His daughter Casey knew better.

Casey Millhone, the team’s youngest member at 20, had grown up hearing her father’s amazing stories. She knew that she wanted to live a life like that. She wanted to have her own stories to tell. Before setting out with her father and the rest of Team MMZero to become the youngest woman to hold the record for canoeing the length of the Mississippi River, Casey had her own fears to face: she was afraid that under such a severe test, she would turn out to be the team’s weakest link. But as her father later attested, Casey would prove to be the one who held MMZero together.

At 42, Bobby Johnson had set course records in highly competitive canoe races such as the Suwannee 230 and the Alabama 650. One doesn’t casually paddle hundreds of miles at record-breaking speeds; Johnson was a passionate and driven member of the ultra distance paddling community. But the race to beat the world record on the Mississippi River would pose his biggest challenge to date.

60-year-old Rod Price had won a dizzying number of paddling races, including the longest canoe race in the world, the Yukon 1000. He was the only paddler to complete the five longest distance races in North America. Price was also a storyteller, sharing his adventures with his readers and audiences as an author and speaker. He said being part of MMZero’s attempt at the Mississippi River world record was both a challenge and an honor. 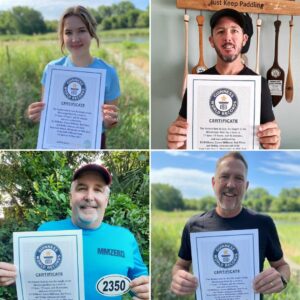 In order to achieve their goal, MMZero as a whole could not afford to take time off to sleep. Team members paddled in nine-hour-long shifts and slept in the canoe, and then only three hours at a time. They paddled twenty-four hours a day. But sleep deprivation and exhaustion weren’t the only obstacles standing between them and the word record. Even extreme fatigue can only hinder or delay well-laid plans; Mother Nature can derail them completely.

As the team paddled on, they faced almost every kind of weather imaginable, from blizzards to ninety-degree heat. One night, a whirlpool came close to capsizing the canoe. Price’s sleeping bag was soaked, and the team had to deal with the effects of hypothermia. With no time to lose, MMZero also learned that time could be gained. A day of paddling in optimal conditions could make up for hours lost in bad ones. Followed closely by their support crew, which handled details big and small and made sure the four team members were safe, MMZero paddled on.

On May 10, 2021, the team reached their finish line and namesake Mile Marker Zero in the Gulf of Mexico. The time that had elapsed since they set out from Lake Itasca? 17 days, 19 hours, and 46 minutes. They had set a new world record.

But that isn’t the end of the story. After MMZero achieved their goal, the team members set themselves a quest: to protect the Mississippi River. By partnering with the environmental coalition Mississippi River Network, the team hopes to help preserve the river for generations to come.